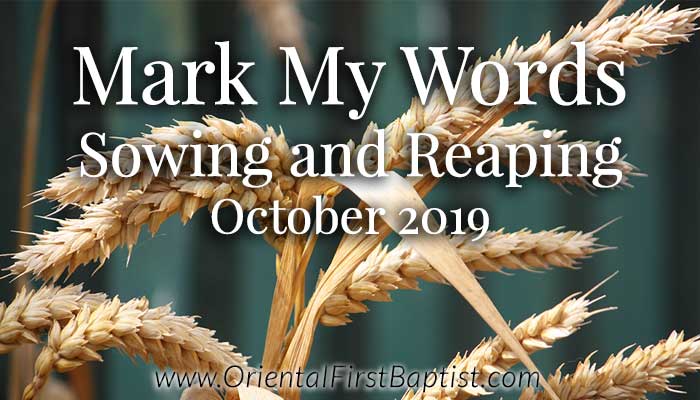 Some of you may be gardeners. If so, you have seen the laws of sowing and reaping in action. When you sow a seed or set out a young plant, you expect in time to receive back a harvest. Surely this will take some time, some hard work on your part, and cooperation of the weather. Nonetheless, you don’t sow expecting NOTHING, you sow expecting SOMETHING. If a farmer sows wheat seeds, he expects a harvest of wheat. If he sows corn, he expects a harvest of corn. You see, both the backyard gardener and the farmer receive back what they have sown. This principal is at work not only in nature, but also in the spiritual lives of men and women. Let’s consider together some laws of sowing and reaping.

1. We reap the same thing that we sow.

When one seed of corn is dropped into the ground, it is fully expected that MANY MORE seeds will be gathered at harvest time than what were initially planted. The blessings that God has in store for us are beyond our imagination. When you sow, in this life, seemingly insignificant acts of goodness, love, and kindness for Christ’s sake, you can be sure that God has in store for you an abundant storehouse of blessings that He can’t wait to pour out upon you!

3. There is normally a waiting period between sowing and reaping.

We forget this principle so easily! After sowing, the gardener and farmer must WAIT PATIENTLY. However, this time of waiting is never idle time. There is weeding, watering, thinning, etc. that must be done. It normally takes several months for the seed which was planted to yield a harvest. God’s work in us and others cannot be rushed. Great disciples of Christ are not grown overnight. God is patient with you and I, as He is with others, desiring that all would come to repentance and a knowledge of Jesus Christ as Lord and Savior. Would we as God’s people not only be faithful in planting the seeds of the Gospel, but also work diligently in both the Church and the world so that our Lord’s kingdom would truly come on earth as it is in heaven.

In the excellent book, North Carolina through Four Centuries, by William S. Powell, he describes the time when piracy thrived on the North Carolina coast. One of the best known pirates was a man by the name of Edward Teach. Don’t recognize the name? Well he is better known by his other name, Blackbeard. As his name suggests, he was known for his long black hair and beard. When boarding a prize ship, he was known to tie smoldering pieces of rope into his hair, which would add to his fierce appearance. He boarded ships from Maine to Florida, robbing them of their precious cargoes. Flying high? Yes. On top of the world? Yes. But not forever. You see the governor of Virginia commissioned two sloops, staffed with British soldiers, and commanded by Robert Maynard. Their mission was to put a stop to Blackbeard’s reign of terror on the high seas.  Blackbeard’s ship was found near Ocracoke inlet, attacked and boarded. With a slashing sweep of his sword, Maynard chopped off Blackbeard’s head. Reportedly Blackbeard’s head was hung high in the rigging of Maynard’s ship when it sailed into Bath. Blackbeard’s reign of terror had come to an end. Even in this historical account we see the law of sowing and reaping at work.  In the end, the only part of Blackbeard that was flying high was his head! What goes around, in the end, does seem to come around.

Would we as God’s people, through faith in Jesus Christ, cultivate good character and do the good works that God has called us to. If we do, we can expect many blessings to be returned not only to us, but also to our families, our church, and ultimately the world. While some of these blessings may be material in nature, the most significant blessings we receive are spiritual in nature, leading to a deeper relationship with God and others.

Be Obedient and Be Blessed, 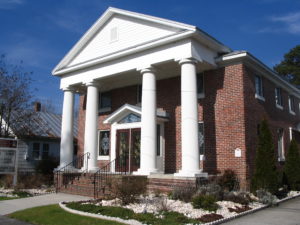