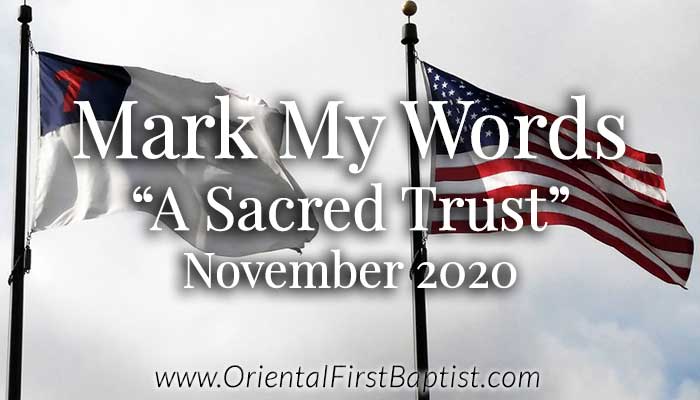 As we approach election day, I felt led to say a few words regarding our responsibilities as Christians as it relates to our country. We as Christians are exceptionally blessed to live in the land of the free and the home of the brave. With that stated, we know that our country is not without problems. Much work remains to be done. On election day, you have a voice in the future direction of our country. Take advantage of it. There are many people around the world that would envy our ability to have a voice in selecting our government officials. Let’s not take this great and wonderful privilege for granted! Vote!

Christians should get involved with government by voting and running for elected office. In my opinion, we need committed Christians to run for elected office because they carry within them the Word of God and the Holy Spirit. Therefore, a Christian can be expected to govern wisely, thereby being a blessing to the people that they lead.

But what about the separation of church and state?

It is a good thing. Let me explain with a brief history lesson. The founders of our nation came from England. In England at the time of the founding there was a strong connection between the monarchy and the Church of England (the Anglicans). Therefore, the Church of England was granted favored status. Nothing wrong with that if you are an Anglican, but big problems for you if you are a Puritan or a member of one of the other dissenting groups. In the event you did not know it, you as a Baptist find your origins in one of these dissenting groups, the English separatists. The true intent of the separation of church and state in the USA was never to prevent Christians from running for office or to prohibit Judeo-Christian values from entering the public square. The purpose for separation of church and state was to prevent one religious group from gaining favored status from the government. If that were to happen, dissenting groups could be persecuted or possibly taxed to support the favored church, even if the dissenting group disagreed with their teachings. The primary purpose of the separation of Church and state is to protect the churches from the state, not to protect the state from Judeo-Christian values.

There are two extremes that we should avoid when it comes to considering government.

One extreme is to believe that government will solve all of our problems. The other extreme is to believe that government is completely unimportant. Christians should find a middle ground between these two extremes. The Bible teaches that human government has been established by God for the punishment of the wrongdoer, and the commendation of those who do right (cf. Rom. 13:1-7). Human government is provisional, yet necessary, in a fallen world. Without law and order, we would not be able to live at peace, and the great commission would be hindered. We should be careful, however, not to think that all of society’s problems will be solved by government officials. They will not. Although government is established by God and plays an essential role in maintaining order, there are some problems that are deeply spiritual in nature that will only be solved by the involvement of the Church, the forward operating base of heaven on earth during the church age. Many of our world’s problems will not be solved until the Prince of Peace, Jesus, returns to earth.

Is Christian involvement in government important?

Is it important for Christians to vote?

Consider the following words of John Adams, “Our constitution was made only for a moral and religious people. It is wholly inadequate to the government of any other.”

Get out. Go vote. Get involved.

“Let your light so shine before men, that they may see your good works and glorify your Father in heaven”  (Matthew 5:16, NKJV)

Blessed to live together with you in this wonderful country, the USA.